Good morning all...A good news to be shared....One of my friend in FB Miss. Shalini Samuel from Kanyakumari has sponsored for Annadhana on Swayamvaram event on 26/01/2014.

Let us all give here our thanks and wishes to her...

Thanks Shalini Samuel  for your donation to the Trust.

Posted by Sharma at 6:52 am No comments: 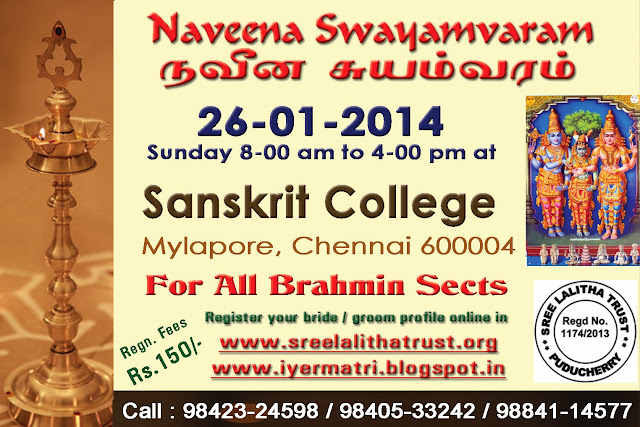 Posted by Unknown at 7:18 pm No comments: Thai Poosam is an important festival observed by the Hindus of southern India during the Tamil month of Thai (Makara Maasam) (January - February). Outside of India, it is celebrated mainly by the Tamil speaking community settled in Malaysia, Singapore, South Africa, Sri Lanka and elsewhere around the world.

Dedicated to Lord Murugan or Karttikeya :


Thai poosam is dedicated to the Hindu god Murugan, the son of Shiva and Parvati. Murugan is also known as Karttikeya, Subrahmanya, Sanmukha, Shadanana, Skanda and Guha. It is believed that on this day, Goddess Parvati presented a lance to Lord Murugan to vanquish the demon army of Tarakasura and combat their evil deeds. Therefore, Thaipusam is a celebration of the victory of good over evil.

Thai poosam is celebrated during the full moon in the Tamil month of Thai and commemorates the birthday of the Hindu deity Murugan. To mark this day of penance and thanksgiving, Hindus pierce their body with metal skewers and carry pots of milk on their heads along a four kilometer procession.
Posted by Unknown at 9:29 am No comments: